Jens Kuhn on "Ebola — An Example of Fake News, Trickery, Imperialism and Other Pitfalls Penetrating Science"

Jens Kuhn on "Ebola — An Example of Fake News, Trickery, Imperialism and Other Pitfalls Penetrating Science" 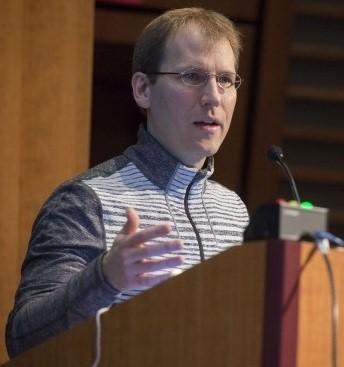 This Center for Evolution and Medicine Seminar features Jens Kuhn, MD, PhD, PhD, MS; is a Lead Virologist in the Division of Clinical Research at the National Institutes of Health/National Institute of Allegery and Infectious Diseases Integrated Research Facility at Fort Detrick. Dr. Kuhn specializes in highly virulent viral human and animal pathogens. He is the author of “Filoviruses: A Compendium of 40 Years of Epidemiological, Clinical, and Laboratory Studies” (Vienna: Springer, 2008) and co-author of “The Soviet Biological Weapons Program—A History” (Cambridge: Harvard University Press, 2012), and has studied and worked in Germany, Italy, Malta, Russia, South Africa, and South Korea.

In the US, he rotated through or worked at Harvard Medical School, Boston, MA; the Arthropod-borne Infectious Disease Laboratory (AIDL) in Fort Collins, CO; the Centers for Disease Control and Prevention (CDC) in Atlanta, GA; and the US Army Medical Research Institute of Infectious Diseases (USAMRIID) in Frederick, MD. Dr. Kuhn was the first western scientist with permission to work in a former Soviet biological warfare facility, SRCVB "Vektor" in Siberia, Russia, within the US Department of Defense’s Cooperative Threat Reduction (CTR) Program.

He is currently a member of the Executive Committee of the International Committee on Taxonomy of Viruses (ICTV), and serves as a Subject Matter Expert for NCBI for all mononegaviruses as a member of the NCBI Genome Annotation Virus Working Group and the database RefSeq. He served or serves on the editorial boards of 11 journals, and has been a peer reviewer for more than 60 journals, including Cell, JAMA, Nature, and Science. Dr. Kuhn was a member of the 2009-2011 US National Academy of Sciences’ Committee on “Animal Models for Assessing Countermeasures to Bioterrorism Agents”; and is continuously involved with AAAS’s and the US State Department’s bioengagement efforts in the BMENA Region, Turkey, and the NIS countries. Dr. Kuhn can be found on LinkedIn and on ResearchGate.

"Ebola — An Example of Fake News, Trickery, Imperialism and Other Pitfalls Penetrating Science"

“Fake News” is an emerging phrase used for inconvenient (or truly false) information spread by mass media outlets. However, the manipulation of information and the spread of “facts” not rooted in robust or even any data is also rampant among scientific experts. Using the example of “Ebola”, I will demonstrate how many things commonly known among scientists about filoviruses are in fact either wrong or grossly misleading; and how publishing imperialism and overwhelming the peer review system in small subspecialties suppresses actually existing data while maintaining myths and fantasy.