Baba Brinkman premiered his album the Rap Guide to Medicine at the inaugural meeting of the International Society for Evolution, Medicine & Public Health on March 20th. The album is now available for download or on CD at BabaBrinkman.com. 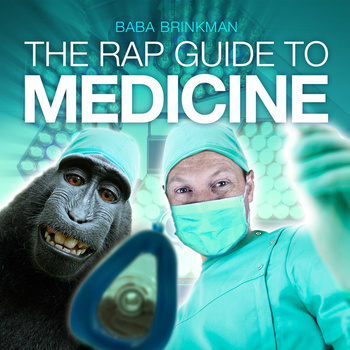 Baba Brinkman is a Canadian rap artist and award-winning playwright. He is best known for his award-winning hip-hop theatre shows, including The Rap Guide to Evolution and The Canterbury Tales Remixed, which interpret the works of Darwin and Chaucer for a modern audience. Brinkman is a recipient of the National Center for Science Education’s “Friend of Darwin Award” which recognizes his efforts to improve the public understanding of evolutionary biology. The Rap Guide to Evolution won a Scotsman Fringe First Award and a Drama Desk Award nomination, and was featured on US national TV on The Rachel Maddow Show and at the Seattle Science Festival opening for Stephen Hawking. In 2011, the Wellcome Trust helped Brinkman launch online music videos and a DVD of his album for use in teaching evolutionary concepts in school.

The ASU Center for Evolution & Medicine and the International Society for Evolution, Medicine, and Public Health commissioned Baba to produce a Rap Guide to Medicine as a vehicle for engaging younger audiences with evolutionary biology. This peer-reviewed album is open access for download by students, educators, and anyone interested in learning more about evolutionary medicine and its importance in transforming our understanding of disease. Baba believes hip-hop is a perfect way to reach teens and young adults as "Hip hop music is all about rebellion, and no one’s ideas are more revolutionary than Charles Darwin’s.”