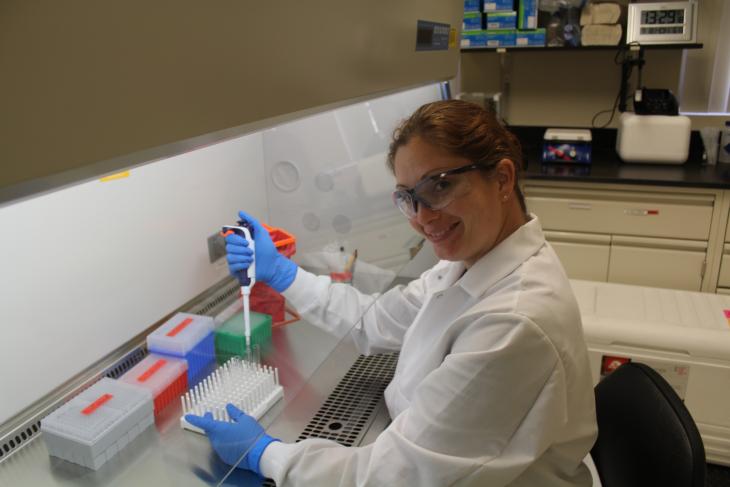 After having her first child, Angela Bond’s midwife asked her if she could share her research expertise on milk. As a genetic and reproduction consultant in the dairy industry, Bond knew plenty when it came to cows. She did think it was odd that her midwife would need her advice, though.

“I thought to myself, well surely if we know all of these things about animal sciences, she’s just not looking in the right places for the people science. But that was not the case,” Bond said. “We have not done anywhere near the amount of research on human milk components or human milk handling as we have with cows, horses or even camels.”

Her midwife went on to found Eats on Feets, one of the largest human milk sharing networks in the world, but Bond got a new direction for her life. The realization that there were such large gaps in research on human milk drove her back to school. She started her PhD at Arizona State University’s College of Nursing and Health Innovation with the desire to look at milk sharing from a public health standpoint.

During that time, she reacquainted herself with milk research and the lactation academic community while helping to set up milk sharing networks. In doing so, Bond said she found one particular scientist to be the most helpful: Center for Evolution and Medicine associate professor Katie Hinde. According to Bond, Hinde’s blog and Twitter were one of her go-to resources well before either of them arrived at ASU.

Then, during one of her regular check-ins on Hinde’s blog, Bond found a post mentioning that there was an opening for a post-doctoral researcher in Hinde’s lab. The position would also be shared with assistant professor Ben Trumble.

“I applied thinking it was a longshot, coming from a nursing and animal sciences background,” Bond said. “How in the world would that fit with the Center for Evolution and Medicine? But it seems to fit pretty well.”

Of course, while Bond had been a fan of Hinde for some time, she also had ties to Trumble before the two had ever met. As it turned out, she had used some of his earlier work on reproduction while she was at the University of Arizona.

Now that Bond is here, her first order of business has been setting up the new CompHEALTH lab. That involves a lot of checking equipment, creating safety procedures and training others, but more traditional research is on the horizon.

While she will be assisting in both Hinde and Trumble’s research, one of Bond’s personal goals is to open a human milk bank in Arizona. Once it’s up and running, it will join the ranks of only 13 other banks in the United States, offering milk to infants who are too ill to breastfeed or whose mothers are unable to produce milk on their own.

On top of that, Bond will work with Hinde to research whether milk can be categorized based on the age of the baby it was produced for to better meet the needs of sick babies in the hospital.